First the "plus" part. Once again I want to thank J.P. McDermott and Western Bop for stopping by WMFO on 9/26 to perform live on my show. If you missed it, the archive MP3 is available for download at http://www.easy-ed.net/. 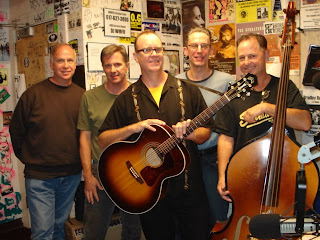 I'll be DJing at the Beehive again this coming Wednesday as part of Cow Island Music's latest Honky Tonk night. Two great bands are on the bill: The Coachmen (a.k.a., the mini Spurs) and the Sacred Shakers. The music starts at 8:00. The first band goes on at 9:00. Hope to see you there! 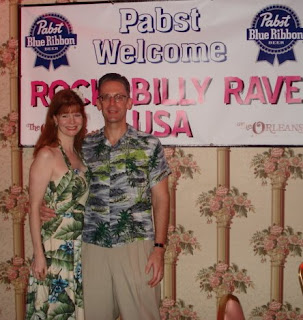 Now, the Rave USA (in brief): Overall it was a great festival. The list of bands and DJs was impressive (and they did not disappoint).

We arrived on 10/1 in the middle of the day. Even with the direct flight, we were a bit beat from the long journey; we missed the Wild Records showcase down at the Ice House. On Friday, though, we were ready to go. The Orleans is a pretty good choice for this event. It has more room than the Gold Coast and people (attendance was about five hundred people I'd guess) were able to move around the hotel pretty easily. (Things could be a bit tight for Viva Las Vegas if they use the same set up though.)

Charlie Thompson is a class act! In addition to putting on a great set, he started off by dedicating his entire performance to the memory of Eric Laufer of the Two-Timin' Three (and Four). I picked up his new 45 (below). Charlie said a new album is in the works. 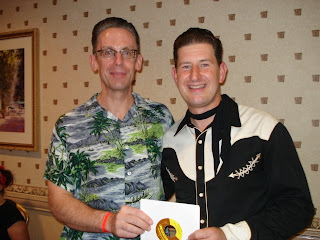 I'll have more to add to this later.

As always, thanks for your interest.